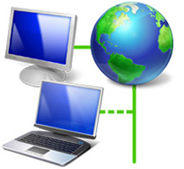 SSH for an encrypted VPN

-with thanks to Bob Harris, who generously and patiently helped me through this the first time, on Apple Discussions

I note that some of the details of menus and options vary as we progress through operating systems, but I believe that it's clear enough. Ask if anything is unclear.

This is to have Internet access to your base computer (home, office, etc.), one name for which is the "server", from another computer at a different location (different room or different continent), the "client". (In my case, the server is an Apple desktop computer - an "ordinary" desktop computer - and the client is a Mac laptop/notebook computer - which makes sense for me but is not otherwise relevant.)

This access is strongly and securely encrypted, so that no one eavesdropping on a router along the way can decipher your data, and apparently it will often "tunnel" through otherwise difficult outgoing firewalls (from wherever you are with your "client" computer), although I have seen this fail.

There are probably several approaches to this, but the one described here uses an "SSH tunnel" ("SSH" meaning "Secure Shell"), including its optional Public/Private Key feature. No one can reasonably infiltrate your tunnel without both keys, either of which is kept on only one of the two computers, and which are not reverse-decrypt-able in practical terms, and which themselves can be further password-protected for multiple layers of security.

And the wonderful thing about all of this is that it's included in Mac OS X at no extra charge; all you have to do is learn how to do it (which will however require some time)!

Alternatives: there are commercial software programs which will do this for you, but I didn't find them much easier than doing it this way. I have not looked at Apple's own "Remote Desktop" program, which is a bit pricey. I haven't really looked at how iCloud might function in this context. Connecting to a non-Mac computer or to earlier versions of Mac OS X may be possible with further knowledge, which however I do not have. And so on; this is just one approach of many.

The following will make more sense perhaps after reading the "How?" section below, but I want to state up here near the top that I have had recent troubles, and that I have solved them.

Upgrading in the Autumn of 2019 to a new Mac Mini, using OS X 10.15 (Catalina): the tunnel crumped. I changed many settings and spent too long peering into help files and user forums, without any joy. The local (client) computer said, "connection refused" at the Remote Login port, and would not budge. This persisted over many days.

One day it suddenly worked again, and all has been well, and ... I'm not quite sure what I did. (Sorry!) Whether this has anything to do with the Mini's new hardware security chip, I do not know. Whether it relates to new features of 10.15, I also do not know. I am not alone in having access challenges, but was unable to locate any information on my exact scenario. But here are a few observations which may help you.

The main thing seems to have been converting from AFP to SMB for file-sharing. (But I may be wrong about that.) Apple has recently "deprecated" (what a word the geeks have chosen; dictionary definition: "express disapproval of"!) file-sharing using the AFP protocol, and has joined much of the rest of the (computer) world, as I understand it, by using SMB, and: SMB uses a different port! So everywhere below where you see port 445 (SMB), it used to be 548 (AFP). (No matter that I had the Sharing settings configured to use both - my tunnel suddenly became happy soon after settling on SMB; it took me a while to wonder if that meant using a different port - it did.)

Now ... the "connection refused" message referred to the Remote Login port, not the File Sharing port, so ... go figure.

In the Privacy panel of the Security & Privacy settings, I have added Terminal under Accessibility and under Full Disk Access. Here and there around yer InterWeb I have found suggestions for many other settings, none of which have been helpful nor necessary for me.

I adjusted users, in Sharing, under Screen Sharing, File Sharing, and Remote Login, first of all separating out another account so that I'm not logging into an administrator account (safer that way, apparently), but I don't think that's the answer. Nonetheless, both the "Standard" and "Admin" users are included. There is no way I found to include the user from the local client computer, and it is working without that. Specifying, where possible, "All users" did not help, and I have reverted to "Only these users:".

It didn't appear to have anything to do with replacing the Airport Extreme Router - no longer available from Apple or from anyone - with a LinkSys router; that worked fine for months until I got the 2019 Mini with OS X 10.15. However, I did rearrange the order of port-forwardings to put 22 - Remote Login - first.

The old section on this page about how to configure an Airport Extreme has therefore been removed. Every router will be different. Read your help files. (If you can't read your help files, then you possibly shouldn't be reading this page.)

On my new Linksys, I needed to assign at least one permanent IP to the remote host, and that is at Connectivity, Local Network, DHCP Reservations. I put my static ports inside the dynamic range - a change from my older (now broken) Airport wireless router. I needed to forward three ports - more below - and that is at Security, Apps and Gaming, Single Port Forwarding.

During the somewhat random debugging of my SSH tunnel failure, I used a port-testing website to see what was open (and/or visible) and closed. I rather doubt that the resulting information contributed, but there it is in case you might find it helpful. The redirected ports, by the way, all seemed to be working as specified, and the native ports - 22, 445 and 5900 - could not even be seen (good!).

I tried disabling the Firewall on the remote host, and it didn't help. I have re-enabled it. All remains well. Under Advanced, I find that my three sharing services are there, as well as one other, and ... I didn't do any of that. The OS did it by itself. Obviously (I think), I have not selected "Block all incoming connections", and I have not selected "Enable stealth mode", and the other settings as found are fairly liberal.

OS X 10.15 in Terminal now uses, by default, zsh instead of bash. I have tried it using both, and that didn't seem to be a factor either.

At various points, if making substantial settings changes, then I of course rebooted both computers and the wireless router.

For illustration purposes only:

And that's it! Your encrypted SSH tunnel is up and functioning, and you can use File Sharing and Screen Sharing immediately.

It won't be as nearly fast over the Internet as on a private network, but it will work.

Sometimes, however, my tunnel collapses and I have to restart it. Rarely, it just doesn't work, and then two hours later, it may suddenly cooperate. If the server locks up, you're out of luck. I have mine to set to power back on automatically after a power failure (cool!).

Things which you will need to remember:

(I remember all of the numbers by keeping them in a password-protected virtual disk on my computer[s], but that's another story.)

This didn't seem to happen as often in the past as it does now, that the tunnel collapses, with the message: "Write failed: Broken pipe". Sometimes that's because the server times out after some undetermined period of inactivity. There are several places around the Web which discuss options to tame this behaviour, but the best option for me seemed to be to place a file called "config" (with very restrictive permissions) inside the .ssh folder on the client. That file on my client computer contains exactly this:

Apparently, indenting the second line matters(?!). Anyway, this sends a tiny confirmation (i.e. low overhead) every 300 seconds to the server, more or less saying, "I'm still here. Keep the tunnel open!" You'll need to know how to use the move ("mv") or copy ("cp") command if you use TextEdit to make the file, and how to do the addressing. For example, from your client account "Home" folder, presuming that you've created "config" there:

These five commands i) change to the .ssh folder, ii) remove "ACL permissions" (if any), iii) limit use of the config file to the owner only, iv) show the permissions of all the files in the folder, and v) change back to the "Home" folder. The listing for the config file on my computer looks like this:

I like lots of password protection, but haven't quite deduced why, when I occasionally have to re-initialize my SSH files, they vary. Recently, I was asked for no passwords at all. Using this commands on the client, starting from the home folder:

resulting in being asked for the private (client) key password (but I had to reboot the computer first before that happened).

Interesting: having redone the entire procedure from scratch (because replaced internal hard drive), all of the permissions presumably went back to default, and my Client now logs in with no password requests. So, will update the permissions of course (on both computers?).

So, having written it down, no wonder it took a while the first time. There's a lot to it.

Enjoy! Questions, comments and suggestions always welcome, but remember that this isn't my "area".